For an 18 month period (March 1957 to August 1958), every regular size Dell comic book had a 10 cent and a 15 cent variant. The 15 cent variants were sold in certain markets to test the feasibility of a price increase. These are rarer and much more challenging to collect than the highly touted Marvel cover variants of the 1970's.

I believe the date ranges was a bit wider than what is attributed above by one month on each side.  What is interesting here is that the statement “every regular size Dell comic book.”  Michelle Nolan described these price variants as an “experiment”:[2]

Based on the trends that I have found through my cataloguing effort, I believe the dates of the “test market” are from Feb 57 to Jul 58.  The origin of these price variants is mentioned in the ComicBase Forum (11/24/2007):[3]

My cover is exactly that of the Bambi #3 issue except that it has a 15 cent price. It is one of a series of rare Dell 15 cent variants issued during a roughly 18 month period in the late '50's. These were issued only in the San Francisco area as a price test. I have quite a few of these variants myself and have begun to upload photos for CB as I will for this issue.

The Bambi issue mentioned above is dated 4/56, so there are examples that date back even further than the dates given above, but these issues seem to be more sporadic.  Here I will focus on the large number of dual-priced issues that were published between Feb 57 and Jul 58 that I can confirm.  In the earlier blog “Are there any Dell variants?” I include a list of several other price variants, most of which are considered to be Canadian Editions.  Below is an example of these price variants for Daffy #11 (Oct-Dec 57). 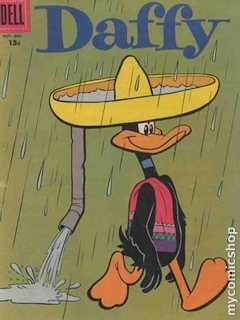 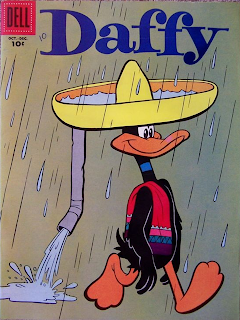 Dell published 587 issues Feb 57 and Jul 58 with a 10¢ cover price.  To date, I have confirmed 330 15¢ cover price variants of these issues -- 56% of the 10¢ issues include a 15¢ price variant during this time period.  A summary listing of these dual-priced issues is provided immediately below, showing that some issues, such as Daffy Duck, Uncle Scrooge, and Walt Disney's Comics and Stories have a 15¢ cover price variant for every issue published between Feb 57 and Jul 58.  It is possible that all comics published in this time frame have have a 15¢ variant as the ComicBase post above would suggest.  Having said this, there are some titles that have not had any 15¢ price variants discovered to date, including Henry, Popeye, and Rex Allen Comics.  It also seems plausible that there were some titles that did not participate in the 15¢ cover price experiment and the dual-pricing was not ubiquitous during this time period.

Another interesting variant that appears to be related to these 15¢ ‘test market’ price variants is the issues that have include “Now 10¢” on the cover.  An example of these cover variants are shown below for Chip ‘N’ Dale #15 (Sep 58). 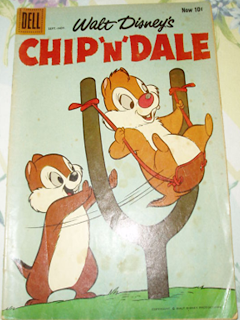 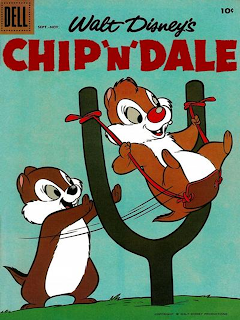 I have confirmed 9 of the 33 issues with a Sep 58 publication date have variant versions with “Now 10¢ “ on the cover (listed below), versus the price without the inclusion of "Now" on the cover.  This would indicate that the experiment concluded in the test regions and Dell was signaling a return to the prior 10¢ cover price.

There are also several examples of Dell Giant issues that carried both 25¢ and 30¢ prices during the time period from Feb 57 to Jul 58.  Dell published 39 Dell Giants with a 25¢ cover price during this time period.  Of the 39, I, with the extensive support from another Dell enthusiast, have confirmed 25 of these issues have a 30¢ cover price variant (64% of the issues).  The listing is found immediately below.  Like the 15¢ cover price variants, it is difficult to know if there are more of these variants, but it is likely that this list is incomplete and more will be located.  Note that I use the notation “DG” to indicate the title is a Dell Giant.

It is not known how many 15¢ ‘test market’ price variants were published relative to their 10¢ counterparts, but they do appear to be quite rare.  It is possible that all 587 issues published between Feb 57 and Jul 58 include both prices.  As more issues are confirmed, I will update this blog.